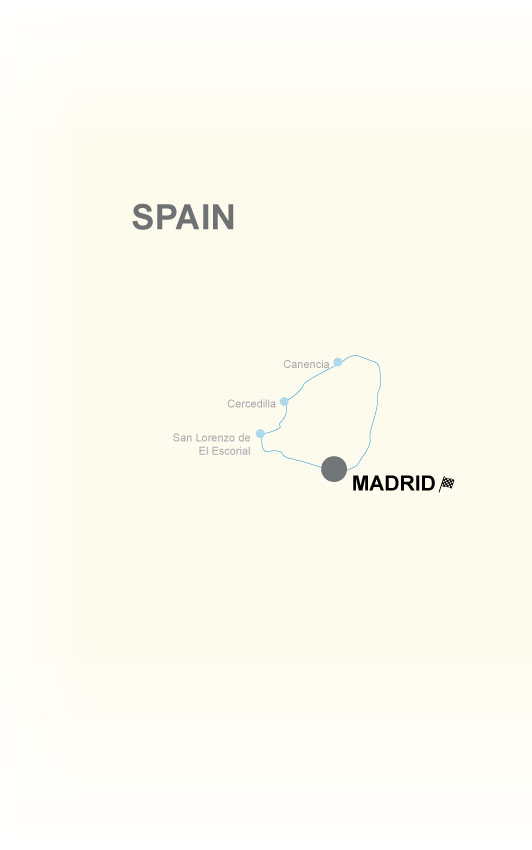 The tour departs from the town of Madrid. We will leave the capital in the north direction of the Cuenca Alta del Manzanares to discover the idyllic town of Miraflores de la Sierra and its two famous ports, Morcuera and Canencia, winding sections surrounded by forests and natural lookouts that invite to contemplation. Afterwards, we will descend towards the Lozoya Valley to the village of Rascafría and the nearby Carthusian monastery of El Paular where we will stop for a well-deserved snack on the terrace.

We will ascend next to the famous port of Navacerrada, a natural border between the Community of Madrid and the province of Segovia crossing previously the port, Cotos, epicenter of the Natural Park de la Cumbre, the Circus and Las Lagunas de Peñalara.

From Navacerrada we will descend to the picturesque village of Cercedilla where we will have lunch in one of its best establishments specialized in the populous gastronomy of the madrid mountain range, near Las Dehesas and its famous Roman road.

In the afternoon, we will ascend to the sinuous and technical port of El León, going up to it from the town of Guadarrama, nucleus that gives official name to the port and the mountains.

The day will end in the monumental town of San Lorenzo de El Escorial, a town that hosts the famous monastery of El Escorial (considered a World Heritage Site by Unesco, built in the 16th century by order of Philip II), highly recommended visit.